When you think of couple Ned and Ariel Fulmer, no-holds-barred silliness is probably the first thing that comes to mind...

He’s 1/4th of YouTube phenoms, The Try Guys, and she’s an LA interior designer. The duo got their start making videos for Buzzfeed and have gone on camera to document everything from weird date nights, giving each other hair makeovers, buying their first home, and a surprise pregnancy announcement.

As goofy and brutally authentic as these two are, they’re just as hard-working behind the scenes. In the last year, they started a business from scratch when The Try Guys went out to start their own independent channel, not to mention buying and renovating their first home – all while Ariel was expecting their first child.

We were thrilled to get to work with Ned and Ariel to outfit their new home with window coverings, and are excited to share our chat with them about completing this monumental project.

P.S. Don’t miss a behind the scenes house tour with Ned and Ariel on Instagram! Plus, get an exclusive promo code.

Ariel: We had been looking in our neighborhood for almost 2 years by the time we found our house. The market in Los Angeles is so tough- any one house could have 25-50 offers in our area so it was important to be decisive and get that offer in fast. We wanted something that was walkable, which is not that easy to find in LA! So when we came across a fixer on a big lot within walking distance to the main shopping street we knew we had found something we could work with.

Ned: I was hesitant. I didn’t see what Ariel saw, but I was tired of looking and I trusted her instinct.

Ariel: We did a complete renovation of the entire house. We started with a full demo of the interior and opened up the living room, dining room and kitchen to create one large room. We opened up the entire back of the house with a large sliding door so that we could look out onto the views of Griffith Park.

Ariel: In the front bedroom we tore out the old windows and replaced them with one big window as well as replaced the interior doors with pocket doors to make the room feel a little bigger. We tore out a built-in in the hallway to make space for the laundry. For the guest bath we kept the original footprint but replaced the floors, tile and all the fixtures.

Ariel: The nursery used to be one big room leading to the main bedroom, so we changed the layout by putting in a wall to create a hallway and moved the closet from one side of the room to the other where we could extend the room into the bedroom. We also put in one much larger window in the nursery for egress, which didn’t exist when the house was built, so all the windows and doors weren’t up to code until we went in and fixed them.

Ariel: The main bedroom was completely torn out and built from the ground up because the foundation slab for the bedroom addition in the 1960’s just wasn’t big enough and we had major plans for a big bedroom with a walk in closet and a large bath. The heart of the house is actually the outdoor space where we built our own deck that can be accessed from the bedroom or the living room. We designed it with big windows and large sliding and french doors so that the outdoors just felt like an extension of the indoors and vice versa.

Ned: What she said.

Ariel: The house itself was a mess when we first looked at it. Compared to so many of the others it was probably the last choice you would think we would make. We were able to see the potential though.

Ned: Ariel really had a vision for how we could make the house work for us. People have been asking for the house reveal for months. It’s like an HGTV show reveal.

Ariel: HA! That was probably the hardest part of the whole process! Any one of those things would have been enough stress at any one time and we are still recovering. There is no such thing as balance with a new baby or a new company, we were both giving 200 percent day and night. The only way we made it through was with a lot of help from family and friends.

Ned: It was the best and the worst 6 months of my life.

Ned: If we’re being completely honest, Ariel did the lion’s share of the work on the design. She was at the site every day making sure every little thing was as it should be. Ariel treated the whole project as if it was a project for a client with timelines and samples and all I had to do was pick what I liked.

Ariel: Ned is being modest, he did a lot of the work as well. He and my dad built the entire deck by hand!

Ariel: This is a home for a young family so I wanted it to feel like nothing was precious but also that adults lived here as well as kids. My goal was to create a lot of small spaces where we could play and read and cook while being together as a family in a shared space.

Ned: We love to entertain as well, so we made it super comfortable to have people pile on the couch for movies or sit around a table for a big meal. It’s laid-back but still elegant.

Ariel: I’m a collector, so we already had all the furniture. The hard part was all the finishings and stuff like appliances and (ahem) blinds. When you are renting you don’t really care as much. As long as it looks good it doesn’t have to be well made because it only needs to last a few years. When you are buying for the long haul there is a completely different set of parameters.

Ned: We got a lot of things custom like the blinds and the sofa because we didn’t have to worry about whether it would fit in the next place.

Ariel: Oh absolutely. The light here is completely different from any other place we have lived. There is sunlight on everything so you just want spaces to be bright and clean and inviting. My mom balked when we told her we were going with white walls, but California is a celebration of the sunlight and the outdoors.

Ned: Having that flow from the inside to the outside is never something we would have considered in Chicago.

Ned: That was all Ariel.

Ariel: I knew I wanted roman shades in most of the rooms. I think the look of roman shades is so elegant. In the living room we went with white so that it matched the walls and faded into the background while also letting a little ambient light in even when they were closed.

The living room and bathroom get an airy look with Premium Roman Shades in Wilmington White with a cordless lift, plain fold, and light filtering liner.

Ariel: For the bedrooms we did blackout for obvious reasons, but I also wanted the shades to stand out a bit more so we chose a cream color with a really lovely texture that almost makes the shades feel like another piece of furniture. 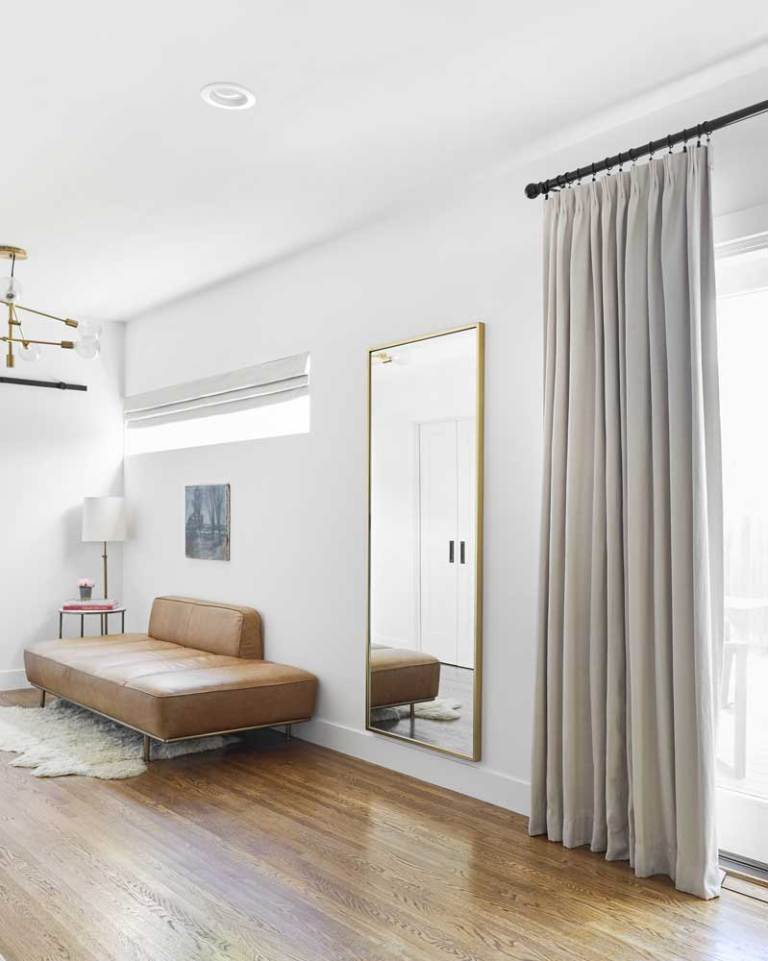 Ariel: The nursery has a striped roller shade, which I thought was fun for a kids room because its kind of like a circus pattern but its still understated with the muted taupe colors. We close that one about 5 times a day for naps, so we got a blackout panel on the roller that works like a charm.

Ariel: Many people don’t realize what a headache it can be to get blinds custom made for your windows. As an interior designer the norm is taking your own expensive fabric to a tailor to get curtains sewn, so working with Blinds.com was the easiest part of the entire home renovation process. All we had to do was measure and choose a fabric and they arrived in the mail about a week later.

Ned: Ariel had them all installed within about an hour. It was really easy.

Ariel: I wanted Wes’s room to be a little haven for him and for us, because sleep is so important for a growing baby. I also made sure there was plenty of storage because babies come with so much gear!

Ned: We spend a lot of time in there feeding and reading and playing. It’s a really calming space.

Ariel: Good question! We’ve been in a bit of a black hole with all the life changes so I’m excited to share and enjoy the work that we have put in.

Ned: There are so many exciting things in the works. Ariel and I are working on pitching a TV show. The Try Guys YouTube channel is up to 4.5 million subscribers and we just launched our merch website at tryguys.com!

Want to give your windows sleek, California style? Steal Ned and Ariel’s look!

Watch the Full House Reveal from The Try Guys Channel:

How to Layer Window Treatments

Read This Before You Buy Motorized Blinds